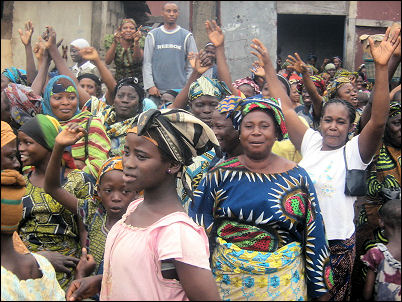 Right before now, the Labour and Civil Society Coalition (LASCO) kick started series of rallies across the nation to sensitize Nigerians on the demands. The Ibadan rally was the 7th of these rallies which had also held in Lagos, Asaba, Kano, Makurdi, Maiduguri and Enugu. The next, and of course the last, of these rallies will be held in the Federal Capital Territory Abuja.

Over 6,000 protesters, wielding banners and placards marched from the Nigeria Labour Congress (NLC) Secretariat at American Quarters Idi-ape from about 9am to several streets in Ibadan and to the Governors’ office where the rally ended. The protest rally was led by the NLC president Abdulwahid Omar, the Co-President of LASCO Dipo Fashina and his Co-Secretary Biodun Aremu as well as the Oyo State leadership of the NLC and Civil Society activists. 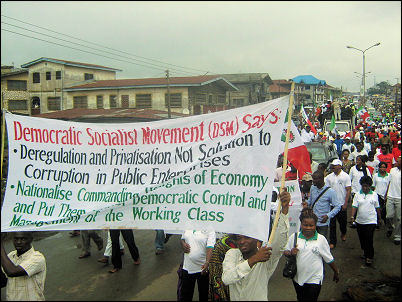 However, the Governor of Oyo State and his deputy were not in the office to receive the protesters, instead the Chief of Staff was delegated to receive the labour leadership and accept a letter containing charter of demands which LASCO has been using the nationwide rallies to submit to state governments for onward transfer to the federal government. In reference to the governor’s absence, the NLC President opined that that has been the practice of all governors who are members of the ruling party (PDP) as governors who are members of opposition parties have always waited in their offices to receive them. If this is intended to indicate there is any difference between PDP and other opposition parties, then Abdulwahid Omar is wrong. All the ruling parties support neo-liberal capitalist policies which have led to an astonishing inequality in society with a few rich moneybags and corrupt politicians stupendously rich while over 80% are poor despite abundance of human and natural resources.

Prominent on the placards were calls for an end to all neo-liberal policies. Some of the placards read: “yes to credible elections but build Labour Party”, “for nationalization of the commanding heights of the economy under the democratic control and management of workers”, “NUT is indivisible don’t waste your time”, “pay living wage to workers”, “Labour say no to deregulation”, etc.

Interestingly, the ASUU chapter at the University of Ibadan marched in the protest with a banner, leaflets and posters calling for adequate funding of education. This development is important considering the reluctance of this union towards protest marches and demonstrations which are the traditional means of struggle of the industrial working class. It is also a confirmation of the method of mass actions and open demonstrations being argued by the DSM as the alternative means of struggle contrary to the sit-at-home strike action for which ASUU is renowned. 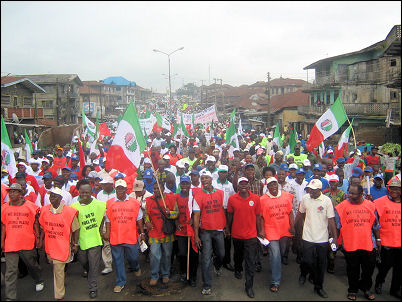 The mood of the protest was decisively anti-government. The protesters railed against the neo-liberal policies of the government. But the most interesting aspect of the rally was the mood of the poor and working masses in Ibadan who lined the streets of the over 3 kilometers distance the protesters marched, waving to the protesters and chanting solidarity songs. Old men, market women and youths showed enormous solidarity for the rally, some openly expressed their anger against the government as some prayed for the victory of the struggle.

One other instructive aspect of the rally was the threat by the NLC president in his address that workers would down tools should the government fail to meet the demands. Since the commencement of the nationwide mass rallies and under the pressure of unrelenting neo-liberal attacks on their working conditions and living standards, members of the DSM have been arguing for further action. Specifically, we have been urging labour leaders to begin mobilization for 48 hour general strike and mass protests. The DSM also intervened in the Ibadan rally with a special edition of Socialist Democracy calling for a 48 hour general strike as an immediate action after the end of the nationwide mass rallies. (see “After Nationwide Rallies” http://www.socialistnigeria.org/?p=1509 on this site)

Also, DSM comrades and other left activists distributed the manifesto of the Campaign for Mass Based Labour Party (CMB-LP) â€“ an alliance of left organizations and individuals seeking to transform the Labour Party into a genuine working class party. The alliance campaigns for the opening of the party to workers and youths to join, building of party branches at ward and local levels and holding of meetings in order to bring life into the otherwise empty party. Up till now, the party bureaucracy views the campaign and its demands with contempt. These demands were enthusiastically supported at the meeting of the Labour and Civil Society Coalition (LASCO) on Wednesday August 5 held in Ibadan in preparation for the rally where several speakers openly urged the Labour leaders to build the Labour Party as a fighting party for the defence of interests of workers and poor masses. (see “Labour’s Political Role comes to the fore at LASCO Protest Planning Meeting” http://www.socialistnigeria.org/?p=1507 )

About 668 copies of the Socialist Democracy were sold. This in a way reveals the deep yearning for knowledge which is always a feature of periods when working class people rise for class actions. If the labour leadership should move decisively to confront the ruling class with strikes and mass protests, it is not in doubt that workers and poor masses will rise in action. One thing is particularly clear; the capitalist ruling class has no plan to meet Labour’s demands. Their attitude to the demands of teachers for TSS last year and the on-going strikes of ASUU, SSANU and NASU is indicative of how government will treat Labour’s demands. The NLC president himself admitted this when he said among other things in his address at the rally that “while it is true the tripartite committee is meeting, government does not seem to be too keen on the issue. Let me however assure you that if nothing happens at the end of this nationwide rally, every worker will down tools”.

In making this statement, it must be stressed that the labour leadership has struck the nail on the head. But further conclusions that labour leaders must draw is that the Yar’ Adua government is a corrupt, anti-poor capitalist ruling class regime which can be compelled to meet the demands of workers for a living wage and decent working conditions only if confronted with a nationwide mass action of workers, youth and poor masses. Therefore, what is immediately necessary now is for the Labour leaders to commence mass mobilizations of the workers, youths and poor masses through the formation of democratic strike committees at workplaces and communities, distribution of leaflets and fliers to educate the populace on the demands of the struggle, holding of mass meetings to plan the struggle and declaration of a 48 hour general strike and mass actions.

However, there is the need for the Labour Movement to get its demands right especially now that event is moving sharply towards a sharp conflict with the capitalist ruling class. As the DSM as repeatedly argued, only a socialist solution can be the best alternative to government neo-liberal policies of deregulation, commercialization and privatization of public utilities, attacks on workers living standards, vote rigging, corruption etc. There is the need for labour to back its call for a raise in minimum wage to N52, 200 with an immediate warning against retrenchment understanding that the capitalist ruling class never gives with one hand without taking away with the other. There is the need to demand nationalization of the oil industry and the commanding heights of the economy under working class control and management as an alternative to deregulation, commercialization and privatization policies. Also importantly, there is the need for Labour leaders to build the Labour Party as a genuine working class political party with socialist programmes and which can serve as a platform to mobilize the working masses to take political power from the hands of the capitalist ruling class and establish a workers and poor peoples’ government that can ensure through public ownership of the commanding heights of the economy under workers control and management the mobilization of society’s resources to guarantee decent living, free education and health, full employment, comfortable housing etc for all. Otherwise, this struggle will be largely seen by working class people as same actions taken in the past without permanent end to their suffering.

One student upon seeing our materials asked to join the DSM. Surely, more youths and workers radicalized by the endless horror to which capitalism is fast condemning mass of working and middle class people will turn to our ideas; the ideas of change through socialist transformation of society.