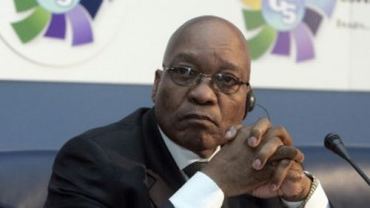 Barely 100 days into Jacob Zuma’s presidency, the class contradictions that have produced political polarisation and then a split in the ANC, have sharpened with a vengeance. The working class â€“ both organised in the workplace as well as the marginalised poor in squatter camps and townships â€“ has challenged the head of SA’s fourth post apartheid government to make good on the promises that propelled him first into the presidency of the ANC and then that of the country.

With discontent that matched the chill of one of the coldest winters in decades, protests against poor service delivery and corruption spread across over two dozen townships in five of the country’s nine provinces, with Gauteng the main flashpoint throughout the month of July. A number of protestors were shot dead, as police fired rubber bullets and allegedly, in some instances, used live ammunition. Scores of protestors were arrested on charges of public violence, intimidation and malicious damage to property.

In scenes reminiscent of the struggle against apartheid, local authorities, municipal offices and other facilities were torched and local councilors and mayors driven out of their homes which were then set alight. Although on a significantly lower scale than in May 2008, the outbreak of protests were marred by incidents of xenophobia, with foreign nationals coming under attack, their small businesses looted and destroyed, and almost all driven from their residences.

The common theme and predominant issue at the heart of the protests, which were marked by violent confrontations with the police, was local government incompetence, cronyism, corruption, lack of water, sanitation, electricity, housing, health and social services. The number of service delivery protests so far this year has surpassed all the service delivery protests of 2008.

The protests exploded against the background of an economic crisis deteriorating more rapidly and with greater devastation on the lives of working class people than experts had predicted and government had expected. After contracting for two consecutive quarters, SA’s economy is now officially in recession. The 6.4% decline in the first quarter follows the 1.8% drop in the last quarter of 2008. In 2009 alone, the number of job losses have so far totaled a conservatively estimated 475,000. If the 302,000 job seekers who became “discouraged” in 2009 are added, the real figure for the first half of 2009 exceeds three quarters of a million coming on top of so-called official unemployment of 23%. The real figure is closer to 40%.

These figures have shaken the complacency of SA analysts, who until recently were providing the chorus to the praise songs of their international counterparts in the World Bank, IMF and rating agencies about SA’s alleged immunity from the global recession. With the economy expected to remain mired in recession for the rest of the year at least, job losses are expected to exceed 700,000 (excluding those to discouraged to look for a job) and more likely a million â€“a “bloodbath” in the words of T-Sec economist Mike Schussler (Business Day 29.07.09).

Zuma’s misfortune has been for his accession to the presidency to take place on the eve of the traditional wage negotiations season which this year are taking place against the background of the worst economic crisis since 1984. With the average worker supporting an average of eight dependants, the pressure to provide for more in the face of an avalanche of job losses was enormous. The situation facing workers was made worse by the fact that whereas inflation and interest rates had declined, to 8% by May 2009, inflation in food, health and transport on which workers spend the bulk of their income, remained at 11.9%, 11.7% and 14% respectively. In addition the electricity parastatal, Eskom, had been granted a 31% traffic increase. To add to the burden on workers shoulders, despite the successive lowering of interest rates that began in December 2008, the effect of the previous cycle has still not receded. More than 2000 houses and 6 000 cars are being repossessed monthly by banks. The average level of household debt remains at 75% of annual income. Civil summonses and garnishee orders (compulsory deductions from salaries for debts) had soared. 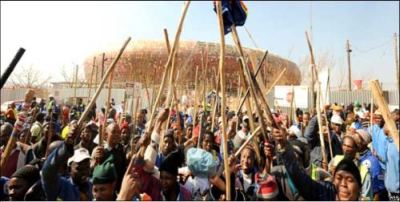 The militancy of the trade union mass action was intended to ensure that especially the Congress of SA Trade Union (Cosatu) leadership did not compromise their members’ interests now that Cosatu’s allies, the triumphant Zuma faction of the ANC, had taken office and a number of SA Communist Party and trade union leaders had been appointed to key ministries (SACP members now hold 40% of ministerial positions). With short-time and lay-offs especially in the car industry undermining workers’ power, those workers who still had leverage were determined not to be made to pay for crisis of the capitalist system. As a National Union of Mineworkers spokesperson, referring to the bosses’ stance in the gold mining industry pointed out, every time during wage negotiations one excuse after the other is put forward as to why workers should not demand a decent wage increase. During the boom the excuse was the negative impact of the strong rand on the price of gold, now the problem is the recession it is. “We will not take responsibility for their recession.”

The tone for the wage negotiations season and the mood of workers were, however, not set by the traditional blue collar battalions, but by the white coated brigades â€“ the doctors in the public sector. Reflecting the accumulated anger of their counterparts in the rest of provincial and national government over the failure of the government to comply with aspects of the agreement that ended the 2007 public sector strike, they demanded the immediate implementation of the so-called occupation specific occupation dispensation â€“ in effect a new remuneration system that would set new higher salaries for identified categories of skilled workers. Despite public acknowledgement by government over the legitimacy of their grievances, doctors were not prepared to wait for promises to be fulfilled. They took action in defiance of the essential services legislation barring them from striking, eventually forcing government into a humiliating retreat after over 200 hundred doctors had been served with dismissal letters.

Before the start of 4-day 150,000-strong municipal workers’ strike, SA had already lost 500,000 working days through strike action — more than double that for the same period in 2008. This wave of worker militancy has led to above-inflation increases in every sector, with the overwhelming majority of trade unions settling for 10% or more. Construction workers, taking advantage both of the enormous profits made by the bosses from the lucrative government tenders for the construction of stadiums for the 2010 World Cup, and the pressure to complete them in time, forced the bosses to settle at 12%, and won allowances for days when weather prevented work, as well as permanent contracts for the significant number of casual workers whose exploitation had become a permanent feature of employment practices in the construction industry.

The municipal workers, whose strike was characterised by violent clashes with police and trashing of the streets in a traditional “cleaning of the rubbish bins” protest and counter-productive acts of gratuitous vandalism by some elements, ended in victory with the unions settling for 13% after striking for 15% and the employer initially offering 6.5%. Despite condemnation of the violence, and the denunciation of lawlessness, it is clear that both in respect of the service delivery protests and the trade unions mass action, the Zuma-government was on the back foot and, mindful of the need to avoid alienating its trade union allies, elected to ride out the storm this time. It is likely therefore that the public sector trade unions will be made an offer that will result in a settlement without a strike.

However, the economic crisis is not going away. Government tax revenue projections are already R19 billion below target. The World Cup may soften the class contradictions for a short period. After that there will be reckoning. Both the bosses and the government will demanding more sacrifices from the workers. The scene will then be set for a renewed sharpening of the class contradictions forcing the polarisation to proceed apace and placing the question of the need to bring the forces of the masses in the townships and the workers on the workplace together in a common struggle as well as a mass workers party on a social programme firmly on the agenda.