We Support Demands of SSANU, NASU, ASUP AND NUT

For the formation of Joint Action Committee comprising all education workers, students and youths 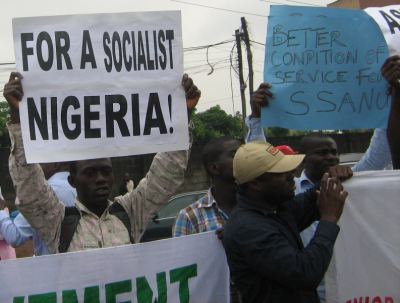 The Education Rights Campaign (ERC) declares its solidarity with members of the Academic Staff Union of Universities (ASUU) on the current strike action embarked upon to fight for improved funding of education, genuine autonomy, adequate better conditions of service and genuine autonomy. We also express our solidarity for the demands of the NUT, NASU, SSANU, ASUP and other education workers unions.

ERC supports all the demands of ASUU and recognizes that victory in the course of this struggle will not be for members of ASUU alone but also for Nigerian students, youths and poor parents who have been finding it hard to afford the high cost of education. We therefore urge all striking education workers to know that Nigerian students are behind them in the struggle to reposition the education sector for the benefit of the poor.

Since the ASUU strike started, the Minister of Education Sam Egwu and his counterpart in the Ministry of Information Dora Akunyili have been peddling lies that government has met 3 of ASUU’s demands. This is a lie. None of the demands has been met. What government has been doing is to spread lies in order to mis-inform the general public. We urge Nigerian students and parents to discontinuance the falsehood. The strike became inevitable because the government has not been sincere with ASUU and of course public education.

An agreement has existed between ASUU and the Federal government since 2001 covering issues of education funding, condition of service, autonomy and academic freedom. The Federal Government refused to implement this agreement; instead it sacked 49 ASUU members at UNILORIN. In spite of this victimization, ASUU was magnanimous enough to enter into renegotiation of this agreement with the government in 2006 with the hope that it would be sincere this time around. After 2 years, the negotiation was completed and an agreement reached in December 2008. Yet again and just like in 2001, the government has started its game of deceit by refusing to sign an agreement they freely entered into. Students and parents must know that ASUU has been patient enough.

Today, over ten industrial unions are on strike or engaged in one form of industrial disputes or the other with government. For instance, federal public radio and television workers have commenced strike actions. All these strikes are over the same issue of government refusing to implement agreement reached with unions or being insensitive to the plight of workers. This anti-poor government ought to be taught a lesson that the people own the country and not a handful of politicians who loot the treasury with impunity. We must all join hands with ASUU and other education workers to compel the government to fund education properly.

THE CAUSE OF EDUCATION UNDERFUNDING

The age-long underfunding of education in Nigeria is rooted in the capitalist market economy which the Nigerian ruling class has adopted as the way of running society. The attendant implication of this is private ownership of the commanding heights of the economy by a few business tycoons whose aim in business is to maximize profit. As a result, education, health and other vital social services are sold piece-meal to these elements under the neo-liberal policies of privatization and commercialization.

As we can all see, only a few (businessmen, government officials and their cronies) benefit from this arrangement while millions of working people become poorer on a daily basis. Education has become the preserve of the rich few while the working conditions of education workers become worse by the day. It is the neo-liberal market economy that is responsible for the shameful scenario where education workers are paid poverty wage. As for us students, astronomical increments of fees and worsening welfare conditions and infrastructures become our lot. This situation exists in every part of the economy including the health sector where health care provision, facilities and standard are compromised due to government under-funding.

From the foregoing, the global economic crisis is just the climax of decades of unbridled exploitation of the masses all over the world by multinational corporations and capitalist governments. Now, the myth of the efficacy of unregulated market economy is crashing on the heads of its advocate – Wall Street economists and capitalist governments all over the world. It is clear from the worsening economic situation in Europe, America and Asia as well as the cut-back of government of all countries in funding of social services, rising job losses and foreclosure on homes that capitalism is not the best way to provide standard public services to the people at affordable rate.

What is most instructive in the world situation today is that while the working people, students and youths are made to suffer the ravages of the global economic crisis, the rich and government officials ensure that their privileges are not affected in any way. That is why in Nigeria, despite the claims of the government that workers’ demand for N52, 200 minimum wage is unrealistic and that poor parents must continue to shoulder the funding of education. For example, the entire salaries and allowances of 17, 474 public office holders is put at N1.13 trillion, a sum larger than the budgetary allocation to education (N224billion), Health (N103billion), Transport (N38billion), Works, Housing and Urban development (N208billion) put together. This is why we cannot and must not accept the lie that government alone cannot fund education. The money is there, it is only being looted by the politicians and their cronies.

Only the public ownership of the commanding heights of the economy (top companies) under the control and management of the working people can do away with anarchy and periodic crisis of capitalism. We therefore urge all education workers and all industrial unions to reject government neo-liberal policies of privatization and commercialization and fight for the nationalization of the commanding heights of the economy under working class control. Workers, students and youths have neither hope nor future under this corrupt and anti-poor capitalist government. We must fight to chase out the Yar’Adua government and replace it with a workers’ and poor people’s government composed of people’s representatives who are prepared to accept worker’s wages and invest our resources to fund free education, health and other public services. This is why the NLC, TUC and LASCO must immediately build a mass working people’s political party to lead the working masses and poor in the struggle to take political power. 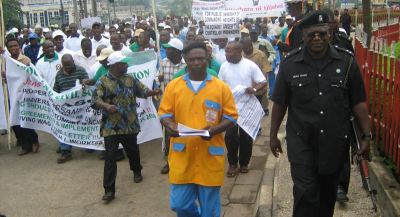 HOW TO BUILD A SUCCESSFUL STRIKE ACTION

It is clear from the lies being peddled by Sam Egwu and Dora Akunyili that the Federal government wants to incite students and parents’ anger against ASUU over the strike by a system of media blackmail and propaganda with the intent of painting ASUU as a body destroying the future of Nigerian students in order to seek its own selfish interest. Why it can be taken for granted that anyone who has been following ASUU’s engagement with the Federal government since 2001 will not fall for this propaganda, yet the condition of idleness which millions of students will find themselves as a result of the strike – especially as it is an indefinite strike – can give this blackmail a receptive audience.

To neutralize government propaganda and gain the active support of the mass of people, we need to build a JOINT ACTION COMMITTEE that will involve all education workers, Nigerian students and youths through joint solidarity actions and protests. This Joint Action Committee must be composed of dedicated activists from all unions in the education sector (including students’ unions) and must be replicated at state, campuses and community levels to implement the program of the strike, distribute propaganda materials, organize solidarity actions and protest marches, picket schools where the strike is waning and get the demands and reason for the strike to the mass of people. Through the Joint Action Committee, it can be possible to draw a charter of demand that will cover the demands of all education workers, students and youths for a united struggle to save education from collapse.

Of course if this done, government will raise the blackmail that students are being used as cannon fodders. But the rot in the education sector concern students, youths and parents too. Sometimes, it is the students and youths that suffer most from government neo-liberal policies of education under funding through increase in charges and bad welfare conditions as well as difficulties to gain admission because schools are not enough. Education workers must therefore not listen to government blackmails but rather mobilize students, youths and parents must to play roles in the struggle. For us in the ERC, we believe that solidarity of all oppressed people is more important than consideration for government scurrilous propaganda. More so, the example of Greece and France last year and especially Germany this year on June 17 where students and teachers held joint protests shows that this is an international practice. Nigerian students, lecturers, teachers, non-academic staff and workers of other sectors must come together in a united struggle to fight for adequate funding of education and an end to all neo-liberal policies.

We call on the NLC, TUC and LASCO to declare a one-day General strike in solidarity with the ASUU strike and other workers on strike. The one-day general strike must also be used to re-launch the demand for N52, 200 National Minimum Wage and to defend workers at local and national levels who have taken the path of strike to press home their demands. This can be consolidated and won on a permanent basis by the building of a mass based pro-people political party that will defeat this anti-people government and install a democratic pro-masses government that will use the resources (human and natural) to meet the needs of all.