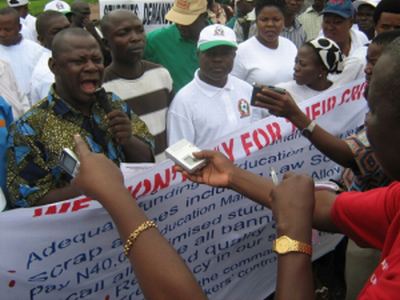 Class solidarity in action as workers, students and youths give support

The 3-week old nationwide strike action of the Academic Staff Union of Universities (ASUU) â€“ the trade union of university lecturers in Nigeria â€“ received a boost on Tuesday, July 14, 2009 as the Labour and Civil Society Coalition (LASCO) organized a successful protest rally in Lagos in solidarity with ASUU as well as with the demands of Senior Staff Association of Nigerian Universities (SSANU), Non-Academic Staff Union (NASU) and other unions in the education sector.

While SSANU and NASU have each held one-week warning strikes to compel the government to fulfill their demands, only the ASUU has called an indefinite strike action which is now in its third week without any clear signal that the Federal Government would meet the demands. Over the previous weekend, the Minister of Education Sam Egwu threatened to invoke the “No Work No pay” rule which when applied in 2001 during a similar indefinite strike that led to the sack of 49 lecturers. ASUU’s demands, which are the most coherent out of all the other unions, include adequate funding of the universities, academic freedom, genuine autonomy and better conditions of service.

About 500 education workers from all the main unions in the tertiary institutions, pro-labour activists, labour leaders, students and youths turned up for the protest despite the early morning drizzle. The protest rally took off at Nigeria Civil Service Union Secretariat, Alausa, Ikeja, at exactly 9:10am with solidarity songs, speeches and mass circulation of leaflets, and ended at Ikeja Business District by 2pm after the march that had covered about 3km. 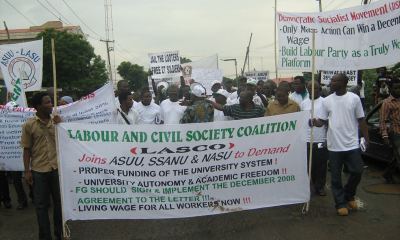 In his speech while flagging off the rally, Biodun Aremu, the Joint Secretary of LASCO, emphasized that the demands of the unions are legitimate and are not selfish. He noted that the unions having embraced collective bargaining, peaceful dialogue and negotiations in the pursuit of their demands, government must sign and implement the demands. He also emphasized that the protest rally is the beginning of series of actions, and that this is just a wake-up call on all Nigerians to stand with the striking education workers.

The Zonal Chairman, Ibadan Zone of ASUU, Prof. Ayo Ajisegiri, who led his colleagues from all the universities in the South-west Nigeria to the rally, explained the terms of reference for negotiation of ASUU as including proper funding of the university system; university autonomy and academic freedom; conditions of service and other matters. In the course of negotiations, the federal government team agreed that the essence of the re-negotiation was to reverse the decay in the university system; reverse the brain drain by enhancing remuneration of academic staff; reposition the university education for national development and ensure genuine university autonomy and academic freedom. The agreement with ASUU on these germane issues was concluded in December 2008 but government has since refused to sign it. He condemned the federal government for reducing the demands of ASUU to increase in wages only.

On the part of SSANU in May 2008, the Onosode Federal Government team reached agreement with SSANU on a new salary structure and revalidation of the 2001 agreement which enables SSANU members to retire at the age of 65 among other issues. Both parties were asked to take this agreement back to their principals for final ratification. On February 12, 2009, SSANU signed the agreement while Gamaliel Onosode signed on behalf of the Federal Government. Up till now the Government is yet to implement this agreement.

While on the side of NASU, the critical issues discussed and agreed with the Federal Government team include the Government’s recognition of the important role of NASU in the education sector; payment of monetization arrears; implementation of the 65 years retirement age for NASU members; abolition of casual labour and contract employment; stoppage of discriminative policies in staff disciplinary matters; and stoppage of staff retrenchment. 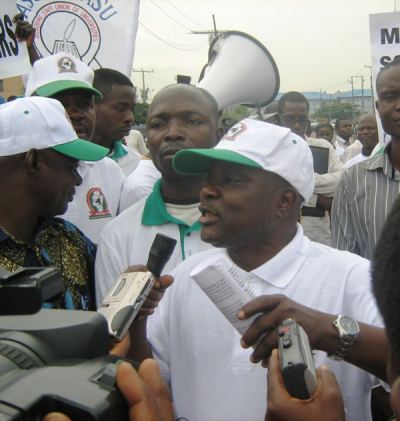 In his solidarity message, Segun Sango, General Secretary of the DSM (CWI-Nigeria) stressed the need for the three unions: ASUU, SSANU and NASU to form a united platform to fight collectively for the development of the education sector. He also posited that in as much as the moneybags are voted into power, the problems in the education sector will persist, thereby necessitating continuous protests and strike actions. He enjoined the striking unions, NLC, LASCO, students and workers to work together to build a working peoples’ political party, which at present could be the Labour Party, that could wrest power from the ruling capitalist elites and for a working people’s government that is run on socialist programme. This, he said, is the lasting solution to the recurrent economic and political crises in the country. He called on NLC and TUC to declare a day of general strike and mass protest in solidarity with education workers and thereby mounting more pressure on government to meet the demands.

Ayodele Akele, a trade unionist and a former leader of the Lagos State workforce, averred that only a revolution could salvage the Nigerian workers from exploitation and oppression by the capitalist ruling class. He suggested that the university workers should add to their demands that it must be made mandatory for children of political office holders to attend public schools as this will make them to be committed to improving the education sector.

H. T. Soweto, ERC Coordinator and member of the DSM (CWI-Nigeria) called on all Nigerian students to support ASUU as their demands if granted will reposition and develop the education sector. He condemned the lavish birthday party and international wedding ceremony organized by Sam Egwu, Minister of Education and his counterpart in the Ministry of Information, Dora Akunyili respectively while the education sector is in serious crisis. He also urged NLC, TUC and LASCO to call a one-day general strike to support the struggle for adequate funding of education and re-launch the demand for a new national minimum wage of N52, 200.

The protest rally enjoyed the support of market women, traders, okada riders, bus drivers and other workers who expressed their support for the strike and they also called on the labour leaders to fight against the anti-poor and pro-rich policies of the Yar’adua government. A concerned parent and market woman who joined the protest rally called on the federal government to implement the agreement reached with the unions. In her words, “our children are idle, sitting at home; government should answer ASUU so that our children can return to the classroom”. She also emphasized that teachers should be the most remunerated as they play a significant role in economic and national development; education being the bedrock of every economy. A lot of things happened that shows how anger against neo-liberal policies has penetrated to the deep recesses of society. A press woman openly agitated in support of the strike against a bystander which drew remarks of whether she was a protester or journalist. Later on this press woman, notebook and recorder held in both hands, could be seen marching and chanting along with protesters.

Prominently displayed were the banners of the LASCO, ASUU, SSANU, DSM, ERC and OYM while members of the Nigeria Automobile Technicians Association (NATA) â€“ an artisan union – came in their blue uniforms. Inscriptions on placards were bold and daring. Some read “A socialist Nigeria is possible”, “Reduce salaries of political office holders to fund education”, “No to Yar’Adua’s neo-liberal policies”, “Meet ASUU, SSANU, NASU and Students demands” etc. Leaflets and posters of the ERC were distributed to the protesters who appreciated the solidarity of students and youth for the strike. The protest swung to a close at Under Bridge, Ikeja with more speeches from labour leaders and activists. DSM comrades from the Agege, Ajegunle, OAU Ile-Ife and Lagos State University (LASU) DSM branches participated and sold copies of Socialist democracy, the DSM’s paper.

The protest although small was interesting and inspiring. One, it was a spectacle to behold as lecturers, non-academic staffs, trade unionists, pro-labour activists and students marched together to the rhythm of anti-government songs. Second, this was the first time that all the unions at the tertiary level of the education sector had held a joint protest rally. Third, by a factor beyond the reckoning of the government and its apologists, all the unions in the education sector have since the beginning of this year, been embarking on national and local strike actions sometimes at the same time but not necessarily together, yet presenting the scenario of workers willfully converging against the government. What has been missing is a conscious attempt to unite these independent and scattered movements of workers in the education sector into a collective action. The joint protest rally of all unions organized by LASCO has laid the basis for this unity if the correct conclusions are drawn as the popularity and support enjoyed by it show that there is a huge potential for further actions.

The DSM is calling for the formation of a Joint Action Committee (JAC) at national, state and campus levels to comprise representatives of ASUU, SSANU, NASU and students. With this committee, it can be possible to unite all education workers with students and draw a charter of demand that covers the demands of everybody. This committee will also have the function of building the strike, picketing, producing and distributing leaflets, organizing symposia and protest rallies and getting the demands of the strike to the mass of parents and workers.

We also call on the NLC, TUC and LASCO to call a one-day general strike and mass protest to compel the Government to fund education adequately as well as fight for a new national minimum wage of N52, 200. While labour leaders have been foot-dragging on the need for a general strike action to demand increase in wages, the living standards of millions of workers and youths have so much worsened on account of budget cut, inflation, serious attacks from government on wages and allowances. The responses of workers have also been combative. Today, the entire education sector as almost been shut down as all the unions are either on strike on threatening to do so. In order sectors, strikes are breaking out by the day. The Nigeria Medical Association (NMA) has given notice of strike while workers in public television and radio stations have already downed tool.

It was in recognition of the rising combativeness of Nigerian workers that made the African Independent Television (AIT) in one of its recent news broadcast to describe this period as “a season of strikes”. A one-day general strike action as part of a comprehensive action plan of labour and civil society to defend wages and allowances and fight for a new minimum wage can further the class struggle from the scattered nature it has now to a coherent and united movement.

Above all, there is the need for labour to build a mass working class political party with rounded out socialist policies to intervene in the economic struggle of the workers and link them with the need to change society for the better. As Segun Sango pointed out, without a workers and poor peoples’ government committed to using society’s resources to fund free education, health etc, education workers, youths and students will continue to find themselves confronted by attacks on their living standards and will continue to fight with no end in sight. Let us transform this season of strike into a season of mass struggles for socio-political transformation of the prevailing unjust order whereby the majority wallow in perpetual poverty in the midst of super abundance.