US: Modern capitalism and the “Swine Flu” outbreak 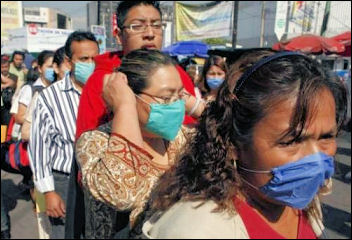 While the swine flu epidemic has not revealed itself to be a pandemic, at least not yet on the scale of the 1918 Spanish Flu, it has exposed the role of profit in creating these situations and the inability of capitalism to swiftly and effectively deal with crises like this one.

The H1N1 flu, known as swine flu, is a mutated combination of four different flu strands. These strands have been found in bird, swine and human flu viruses. It is transferable from human-to-human and has now been confirmed in over 650 cases worldwide. 443 of the cases are in Mexico (Associated Press, 5/2/09), with death toll estimates ranging from around 100 up to 176. The Centers for Disease Control and Prevention is expecting more deaths to come.

The role of agri-business

As Mike Davis points out in his article from the Guardian on 27 April, fears of such a viral mutation and scientific advocacy for federal monitoring of it goes back as far as 1998 when a similar virus broke out among hogs on an industrial pig farm in North Carolina.

Industrial animal farms are huge farms, set up by agribusinesses to produce more profit by packing more animals into less space with harsher conditions. Davis’ article points out that over 65 million hogs are now concentrated in 65,000 industrial farms. This is true with chickens as well. By federal standards, chickens only need to be provided 16 inches of room to survive.

Animals end up residing in their own filth, pumped full of steroids to grow faster and antibiotics to withstand open wounds and infections. In addition, they are packed so tightly together on these farms that any disease easily sweeps across the entire population of these farms and helps create more resistant viruses and bacteria.

Farmers that oversee these industrial animal farms are at the whim of agribusiness.

For instance, Perdue, a national chicken company, owns all legal rights to the chickens its farmers raise and what they are fed, effectively leasing them to the farmers. However, Perdue is not legally responsible for the waste created by the chickens, leaving its management and disposal to the farmers (PBS Frontline, 4/21/09). These farmers do not have the resources or money that Perdue has to safely undertake such an operation. The huge amount of waste runoff creates serious problems with water contamination and other health hazards.

The pursuit of profit in farming by big business not only directly affects the transmission and creation of new diseases but also takes a destructive toll on the environment.

Profiteering has long caused damage to the environment. For instance, the use of fossil fuels and other non-renewable resources not only pollutes the air we breathe (the creation of “smog”) but also has opened up a gigantic hole in the shielding ozone layer around the Earth, resulting in an exponential increase in climatic change in the last ten years.

The animal waste runoff from industrial farming has led to the poisoning of fresh water sources from these places and has resulted in massive fish kills. Since 1991, over a billion fish in North Carolina’s Neuse River have died from these causes, more than anywhere else in the United States.

At the moment, the world stands one phase away before a global H1N1 flu pandemic is declared. However, pandemic status refers only to the spread of the illness and not to its severity. So far reports indicate that the threat of H1N1 might not be as severe as was initially feared (The New Nation, 5/2/09). Wealthy nations have taken some necessary measures to contain and stop infection such as screening patients who present flu like symptoms, providing anti-viral medications and even developing a vaccine before the next flu season hits in the northern hemisphere.

When the virus was first identified, scientists believed it had a high mortality rate because of the high death toll in Mexico. In reality, so far the virus is proving to be treatable with the anti-viral medications Tamiflu and Relenza. Patients have been responding well to the medication and cases outside of Mexico have been mild and non-fatal except for a Mexican boy who died in Texas (Associated Press, 4/29/09).

If the H1N1 virus becomes a global pandemic, it will hit the countries in the ‘developing’ world the hardest. To make matters worse the crisis is taking place during the annual flu season. The Mexican government’s inability to deal with the epidemic shows that poorer countries do not have the necessary resources to care for the sick. During the height of the epidemic in Mexico, the government distributed about six million masks in Mexico City, a city of about 20 million people. In fear that the infection was spreading beyond control, ambulances refused to pick up the sick and many were turned away at the hospitals.

The World Bank plans to provide a $205 million loan to the Mexican government to help deal with this crisis. Mexico has already received $25 million (Guardian, 4/27/09). Upon receiving this money; Mexico was able to purchase the necessary anti-viral medications and began to assess the severity of the crises. The World Health Organisation has also donated 2.4 million treatments to 72 developing nations (The Houston Chronicle, 5/2/09). Not surprisingly, after this, the situation began to improve.

Now the cases and deaths are beginning to level off thanks to a near complete economic shutdown. In an effort to contain the infection, the government of Felipe Calderon has enacted a measure closing all private businesses and government agencies until May 6th, all public gatherings have been cancelled, including the demonstrations on May 1st, International Workers Day.

The neoliberal policies pursued by the ruling class have left nations around the world in shambles. Since the 1970s, capitalism has attacked living standards, wages and conditions around the world in order to turn a profit, deepening poverty and neglecting healthcare and basic human needs. Through free trade and globalisation, there was not only a race to the bottom in wages but also in living conditions and infrastructure.

Capitalism has created a world where there are food surpluses while around 25,000 people die from hunger every day; a world where poor and working class people die from treatable diseases because they don’t have the money to go to the doctor. Under capitalism, the richest 10% own 85% of the wealth.

Viruses such as the swine flu thrive in conditions of extreme poverty. The horrible conditions in poverty-stricken regions of the world create breeding grounds for these viruses. Pollution, hunger and disease weaken immune systems and leave people exceedingly vulnerable to infections that lay the groundwork for epidemics. Disease does not acknowledge national borders, so the existence of these conditions anywhere on the planet leaves the door open for a global epidemic.

Capitalism has also created the factory farm, which serves as an incubator for viruses and disease that affect both animals and humans, and causes irreversible environmental damage. We need to produce food in a manner that is not only disease-free but also sustainable and environmentally responsible.

The adequate distribution of medical supplies, including vaccines and medicine, throughout the entire world is an integral task in confronting disease. It is also necessary to take medical research out of the hands of greedy corporations more worried about making money than actually treating and preventing disease and put it in the hands of those affected most.

An alternative to agribusiness

None of these problems can be solved under the current domination of agribusiness and capitalism. As diseases keep evolving, the only way to ensure that these crises are prevented and dealt with efficiently is through democratic planning by the masses of people. By eliminating the profit motive through democratic socialist planning of the economy, we can address any issues that may arise more swiftly and we can develop a production and operation plan that prevents most of these events from occurring at all.

The H1N1 flu has thrown open the door on the rotten infrastructure that capitalism has created. In a matter of a few weeks, a global outbreak has occurred, causing hundreds of preventable deaths and provoking a global crisis.

Under the rule of big business and capitalism these problems will keep occurring. Only a democratic socialist system could eliminate poverty, provide quality healthcare for all and end the reign of corporate destruction of our environment and our lives.

We need to organise a powerful movement to break the chokehold of big business on our health and food. We need to campaign against the corporate destruction of the environment and against war, where untold billions are spent to destroy, and use that money to help the developing world. We need to organise on a national and international scale to break the rule of big business and capitalism. The resources are available to defeat privation, racism and environmental degradation in our lifetime, but we must organise to end the rule of profit in favour of democratic control.