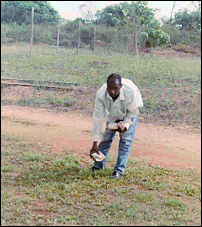 It has been waves of victimization and dehumanization for Tajudeen Oyeniyi, popularly called “Ojingolo”, at the Osun State Broadcasting Corporation (OSBC) where he worked as an audio officer until his present travail. As at the time of going to press, if Ojingolo is not weeding, he is picking litters and pebbles at the OSBC premises as a result of inhuman and callous treatment being meted out to him by Mr. Bisi Ijiwole, the OSBC Admin Director.

It started like a joke with unwarranted queries from his superiors at the Orisun FM Ile- Ife where he used to work as an audio officer. This may not be unconnected to primordial tribal sentiment that colours administration of things at the radio station. It is said that the people from Ile- Ife are the ones who are given the “gloves treatment” at Orisun FM while for Ojingolo, who is not from the town, it is a different ball game.

He was approved to attend a computer course at the OSBC Head Office, Ile Awiye, Osogbo, March 29, 2008 when Mr. Bisi Ijiwole terminated his participation and sent him back only after attending only one day out of a two week training course all as a ploy to rope him. He then was suspended for one week without pay allegedly for absence from duty when in actual fact he was directed to attend a computer training programme.

Ojingolo was made to do the jobs of the favoured others who could chose at will when to come to work. In fact, for about 3 months: September to November 2008, the Orisun FM Monthly Roaster of duty was designed in a way that two members of the staff did not have any specific duties while Ojingolo shared all the work done.

The resilience of Ojingolo, who was not perturbed at being over-worked, was not enough. They want him out! In November 2008, Mr. Bisi Ijiwole redeployed Ojingolo from Orisun FM to the OSBC Head Office in Ile Awiye, Osogbo without any reason. However upon reporting to duty he was handed most inhuman treatment. Ijiwole instructed Ojingolo to cut grass and weed bushes. The explanation that Ojingolo is an Audio Staff and not a gardener, fell on deaf ears.

The local unions, RATTAWU & NUJ OSBC chapel ,took up the matter to no avail. Ojingolo was told to pick stones and pebbles. At a time, Ojingolo had serious backache/pain but for a Good Samaritan who helped massage his back.

Ojingolo is a middle aged man married with children who all his over twelve years work with the OSBC did only carried accounting or audio/programme duties. No doubt he has found his present situation very dehumanizing and painful. However, he is back at OSBC premises picking stones and pebbles hoping that one day justice may come his way.

You can join the protest against this unjust and inhuman treatment of Tajudeen Oyeniyi by writing, calling or sending text messages to the following: