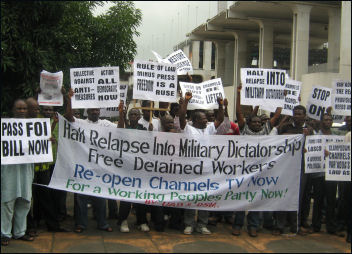 The march on the NBC, which was organized by the Democratic Socialist Movement (DSM) and United Action for Democracy (UAD), also had in attendance members of the Nigeria Union of Journalists (NUJ), Civil Liberties Organisation (CLO) and Campaign for Democracy (CD).

Channels TV had been suddenly shut down by the State Security Service (SSS) and some of its staff arrested by armed SSS operatives at the behest of the Yar’Adua government on Tuesday September 16. The reason given for this military-style raid was its broadcasting of a report, previously carried by Agence France Presse the French news agency, that President Umar Musa Yar’Adua was planning to resign.

The NBC subsequently retrospectively tried to legitimise the raid by suspending Channels TV’s operational license on the grounds that it “broadcast an unwholesome news, which could have been detrimental to national interest and lead or likely lead to a breakdown of law and order in the country”. 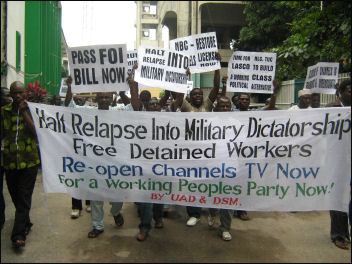 Friday’s protest action which was covered by journalists from both print and electronic media, was addressed by Segun Sango, the DSM General Secretary, Biodun Aremu, the UAD Convener, as well as the Executive Director of CLO and other civil society activists.

The protesters stormed the NBC’s Lagos office, which had been deserted by the top officials, with a banner and placards denouncing the closure of the TV station as barbaric and undemocratic and calling for its immediate re-opening and the release of its detained workers.

Beyond the condemnation of Channels TV, the protest was organised to alert labour and pro-masses’ organisations on the urgent need to prepare to halt the relapse into military dictatorship, and commence the process of building a fighting working peoples’ political alternative.

A few hours after this picketing the National Broadcasting Commission lifted the suspension of Channels Television and the detained Channels staff were released by the SSS. However the NBC said that the SSS would be continuing its investigation of the TV station.

Halt a Relapse into Military Dictatorship

The United Action for Democracy and Democratic Socialist Movement (DSM) totally condemn the barbaric closure of the Channels Television and illegal arrest and detention of four members of staff of the TV station by the armed operatives of the State Security Service (SSS).

We call for the immediate and unconditional re-opening of Channels and release of the detained staff. The government must also tender unreserved apology to the TV station and the public for this crude military- like assault.

We equally condemn the unlawful suspension of the operational license of the Channels TV and call for its immediate restoration.

The media organisation was shut down on the ridiculous excuse that it had broadcast a report alleging that President Yar’Adua was planning to resign. This highhanded action of Yar’Adua government, which is reminiscent of the military absolutism, has further rubbished the much- touted rule of law and due process posturing of the administration.

Instead of engaging itself in this self-defeating war against the media, Yar’Adua government should in fact face the real task of provision of electricity, road, railway, education, health care and other basic needs and infrastructure whose absence constitutes an insurmountable hurdle towards economic development and better living standard for ordinary Nigerians.

The Gestapo-like clampdown on Channels has actually exposed the rule of law and due process mantra of Yar’Adua government as a monumental fraud and mere publicity posturing. We hold strongly that rule of law without press freedom is a ruse.

We therefore call on labour, socialist and civil society organisations to commence the process to halt a relapse into military dictatorship and for a collective action against all anti-democratic, barbaric and anti-poor measures of Yar’Adua government. We specifically call on NLC, TUC and LASCO to organize mass demonstration against this brutal encroachment on democratic rights and citizen liberties.

Lest we forget, the last military dispensation was characterized by arbitrary closure of the individual media houses as well as arrest of the opponents of the military rule. If after nine years of return to the civil rule, the state security apparatus still operate with the psychology of an army of occupation over a conquered territory, then it is the time the working people needed to respond emphatically that never again would they tolerate military arbitrary rule under any guise whatsoever.

We call on the management of the Channels TV not to leave this unjustifiable and unprovoked assault unchallenged. Public apology must be demanded, at the same time the management of the TV station should equally demand adequate financial compensation for the losses and unjustifiable humiliation suffered as a result of this act of state brigandage.

We accordingly demand that all the security officers and operatives involved in this undemocratic assault on the Channels TV should be identified and brought to book. This is the only way the Yar’Adua administration could successfully wash its hand off this crude violation of a central principle of civil rules that guarantee freedom of expression and the press.

Finally, to ultimately prevent a re-occurrence of this barbaric assault, labour, socialist and pro-masses organisations should immediately come up with concrete action to put in place a working class people political alternative that could wrest power from the self-serving ruling elite at all levels and usher a working people government that is responsive to the needs and aspirations of the masses. Only such a government will have nothing to hide from the people, and as such will have no cause to arbitrarily implement policies just to satisfy the hollow ego of those that currently find themselves in power.