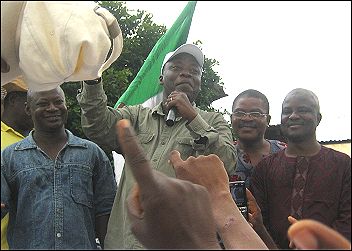 For the second time in two weeks, teachers, members of civil society organisations and labour activists took to streets in Lagos on Thursday July 24, primarily to demand the immediate implementation of the Teachers Salary Scale (TSS), an improved pay package originally agreed way back in 1991. Across Nigeria teachers have been on indefinite strike in support of this demand since July 1. This latest action was organised by Labour and Civil Society Coalition (LASCO), the body linking labour, political and civil society organisations the DSM is part of..

Besides Lagos, there was a similar action in Ekiti State, southwest Nigeria, where about 500 protesters including teachers and members of Democratic Socialist Movement (DSM) were tear-gassed by the police while on the demonstration. In addition to circulation of DSM leaflets on the teachers strike, 200 copies of two special editions of Socialist Democracy, including the April 2008 issue on the declaration of Adams Oshiomhole as winner of Edo governorship election by the election petition tribunal, were sold.

Significantly, the rally and march protest held yesterday in Lagos was of much higher scale in terms of participation and areas covered than the July 10 action, which itself was a huge success. About 5, 000 protesters were on the march and covered about 5km from Maryland to the Nigeria Labour Congress (NLC) Secretariat in Yaba, displaying banners and placards and circulating leaflets. The protest march was so effective that the ever-busy Ikorodu Road was deserted with no vehicular movement as normally happens during general strikes.

More significantly, the rally/protest march witnessed the active participation of female teachers who constituted about 60% of the protesters.

Also, unlike the last protest where it was only DSM that circulated leaflets, there were leaflets from other organisations including LASCO. Besides, the Academic Staff Union of Universities and Education Rights Campaign issued press statements which were circulated to journalists present.

So far, all this has shown the determination of teachers and pro-labour activists to go the whole hog in ensuring victory in this struggle. This resolve could be cut short particularly among teachers who may be struggle-wary if the Nigeria Labour Congress does not do more than verbal support. It is commendable that the Congress has fixed July 29 for emergency NEC meeting on the teachers strike. We of the DSM urge the labour leaders to rise from the meeting with declaration of a day of action including solidarity strike and mass protests, and commence massive mobilisation of workers and poor masses in earnest to that effect. The NLC should also use the meeting to flag off the campaign for a living minimum wage for all workers.

The protest march had stop-over at some strategic places to address members of the public who expressed and exhibited total support to the teacher struggle. At Ojuelegba, it was the turn of the recently imprisoned Taiwo Hassan Soweto, the Coordinator, Education Rights Campaign (ERC), to address protesters and the public.

All the speakers commended the resoluteness of teachers so far and urged them to remain steadfast in order to achieve victory in the struggle. They berated exhibition of stark irresponsibility by the Federal Government to the teachers’ demands.

The Yar’Adua government has refused to meet the singular demand of teachers for issuance of administrative circular on the TSS with flimsy excuse that in line with principle of federalism it cannot impose a salary structure on the state governments. Whereas, it is an unambiguous constitutional responsibility of the federal government in accordance with the relevant provisions of 1999 Constitution to set standards on labour and education matters (See DSM and LASCO leaflets). What teachers are simply asking for is a circular that will set standard and guideline on TSS and serve as basis for negotiation with respective state governments. Over 90% of Nigerian teachers are in the employ of the state governments.

TSS as an agreement was reached with the National Council on Education headed by Minister of Education and has representatives of state governments as members.

The federal government has refused to issue a circular despite the existing agreement with teachers in order not to open a floodgate of demands of other workers’ unions for improved pay and working conditions. Though, there are huge resources, particularly from the sales of crude oil alone with soaring prices, to meet the demands of teachers, the problem is that doing this will reduce the collectively owned wealth set aside for looting in characteristic of neo-liberal capitalist government.

We of the DSM, who have been centrally involved in the on-going teachers’ struggle both in planning and setting direction, call on teachers and labour activists to prepare for another phase of struggles with the state governments if the current one succeeds in compelling federal government to issue the circular. More importantly, the best lesson that could be learnt in the struggle by teachers, other workers and poor masses is the need for a fighting party of the working people which could wrest power from the thieving ruling elite at all levels of government and commit huge public resources to the good of workers and poor masses as well as provision of social infrastructure.

It is a heart-warming development that Labour Party has been active since the very beginning of the teachers’ struggle both in planning of action and rallies. The Party could however do much better by producing and circulating materials calling on teachers, other workers and pro-masses’ individuals and organisations to join the party as the working class people political alternative.

It is also good that already the mass action has started taking places outside Lagos. It has equally been learnt that there will be rally/protest march in Osogbo, Osun State, on Tuesday July 29.